Mitochondria: the tiny energy producers of the cell

Every human is made of an estimated 37 million cells, each of which contain compartments known as ‘organelles’, specific subunits with unique functions. While the nucleus provides the genetic instructions to the cell, mitochondria are key to bioenergetics and metabolism of the organism. Even though they are essential to keep us alive, mitochondria were not always part of our cells.

Mitochondria use oxygen to process the nutrients that arrive to our cells, and in return, the organelle produces the chemical energy (ATP) that the cell – and the organism – needs to carry on living. This is the reason why mitochondria are widely known as the ‘powerhouses of the cell’. Nevertheless, far from being their only role, mitochondria also act as quality control checkpoints, participating in a wide range of cellular events beyond energy production. These include the regulation of cell growth, cell division, calcium homeostasis, lipogenesis and the production of steroid hormones. Mitochondria can even determine cell fate, triggering signaling cascades leading to cell death. The origins of mitochondria also explain how they have their own DNA (mitochondrial DNA or mtDNA), which codes only for 13 mitochondrial proteins, while the rest of the proteins that mitochondria need (approximately 1500 in mammals) are encoded by the nucleus (nuclear DNA or nDNA). Thus, the mitochondria and the nucleus act as two independent entities which communicate continuously.

Mitochondria as a dynamic network

Mitochondria were originally conceived as solitary and static entities in the cytoplasm. However, far from that, the mitochondrial network is highly dynamic and adapts in size and morphology to changes in the cellular environment (Figure 2). For instance, starvation leads to the fusion of mitochondria, which increases the oligomerization of ATPase subunits. This maintains ATP production and contributes to the survival of the starving cells. On the other hand, fragmented mitochondria were observed in diet-induced and genetic obese mouse models, associated with mitochondrial dysfunction and insulin resistance. Therefore, changes in mitochondrial morphology correlate with various cellular and environmental stresses, and this alteration in mitochondrial shape contributes to their final function.

Figure 2. On the left, old perception of the cell, in which mitochondria are depicted as individual bean-shaped entities. However, visualizing live cells under the microscope reveals mitochondria (on the right, in green) in different shapes, located closely to the nucleus and extending throughout the cell.

The conventional conception is that mitochondria are only inherited from the mother, because when sperm fertilize an egg, only the nucleus’ genetic information pass on to the embryo, while the rest (including the father’s mitochondria) is lost while entering the egg (Figure 3). Therefore, the embryo has all the mitochondria from the mother’s egg. However, researchers have recently identified few cases in which the mitochondrial DNA (mtDNA) could be inherited from both parents. As mtDNA sequencing is only performed when a mitochondrial disease is suspected, it is not clear how frequent this event might take place or whether the bi-parental inheritance is associated to pathogenicity or mitochondrial dysfunction. 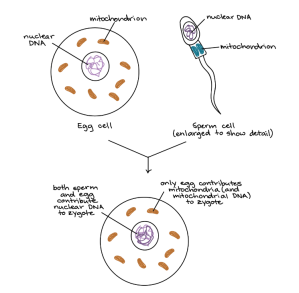 Figure 3. Conventional mtDNA inheritance. Unlike nuclear DNA, which is inherited half from mother and half from father, mitochondrial DNA is passed only from females. When the sperm fertilizes the egg, it leaves behind all its mitochondria: the embryo then only contains maternal mitochondria. Source: “Inheritance of mitochondrial and chloroplast DNA”, Khan Academy (public domain).

Mitochondrial diseases target parts of the body that require the greatest amounts of energy, such as the heart, brain and muscle. While some mitochondrial disorders only affect a single organ (i.e, the eye in LHON syndrome – Leber hereditary optic neuropathy), others involve multiple organ systems and present a more complicated symptomatology (such as the Leigh syndrome, characterized by progressive loss of mental and movement abilities). Raising awareness is essential to educate people about mitochondrial diseases, but also provides a time for the affected families to come together and get in contact with the research carried out in the laboratories (Figure 4). Establishing a proper diagnosis can be relatively straightforward when a patient has a recognizable phenotype, which is supported by the family’s history and validated by molecular genetic testing.

Overall, the involvement of mitochondria in the health/disease balance emphasizes the importance of understanding how mitochondria work to establish the optimal therapeutic strategies.

I am a PhD candidate working at the École Polytechnique Fédérale de Lausanne (EPFL) in Switzerland. My PhD project is about mitochondrial dynamics, and how changes in mitochondrial morphology impact on metabolic adaptation. I am really interested in science communication and public outreach, as I believe it is of the highest importance for researchers to bring science to society. This pursuit brought me to collaborate with the BioScience Network Lausanne (BSNL). My project has received funding from the Marie Skłodowska-Curie fellowship “ChroMe” (European Union’s Horizon 2020 Research and Innovation Programme Grant Agreement No 675610), which combines research with a strong component in public outreach.

One thought on “Mitochondria: what they are and how they can make us sick”