As individuals, we have become exceedingly comfortable with the traditional loci of control: internal or external. In our own minds, we have either had control over our body and health… or we haven’t.

We can choose to exercise, eat healthily, and stimulate our minds, the end result being a boost in overall wellbeing, or we can choose self-neglect and our wellbeing will suffer as a consequence. The alternative circumstance is that our wellbeing can be affected by means wholly outside our control. Our genetic predispositions, for example, have substantial impacts on our health and can potentially lead to diseases like cancer.

There is, however, a third agent that holds sway over our wellbeing: the human microbiome.

The human microbiome is the collection of microorganisms that live in and on our bodies. The bacteria that reside in our gut (our intestinal microbiota), in our mouths, on our skin, in nearly every part of our bodies, are all a part of an ecosystem as dynamic as any that exists on Earth.

One particular relationship that is beginning to present itself is the involvement in the microbiome in development and clinical management of cancer, particularly colorectal cancer (CRC).

“If you know the enemy and know yourself, you need not fear the result of a hundred battles…” ― Sun Tzu, The Art of War Fig. 1 – Example of two colorectal tumors. (Blausen Medical Communications, Inc. CC BY 3.0)
Cancer, in the most fundamental sense, is a disease of the genome thus, genetic change must occur for cancer to progress. To me, this is the most remarkable and spooky aspect of the human microbiome’s effect on cancer progression. These microorganisms that live within and outnumber us in our own body initiate cellular changes at the most personal level: the genetic material that makes us… us.
CRC (Fig. 1) is the third deadliest type of cancer worldwide accounting for over 750,000 deaths in 2015, trailing only cancers of the lung and liver. Just as Sun Tzu urged knowing one’s enemy to gain advantage on the battlefield, gaining an understanding of the underlying causal mechanisms of CRC pathogenesis is imperative if we are ever to defeat it. Ever more frequently, researchers are beginning to elucidate mechanisms by which our intestinal microbiome can initiate CRC progression.

DNA damage by the microbiome and cancer initiation

DNA damage plays a significant role in the development of cancer. In a recent review, Wang et al. has established a collection of proposed mechanisms by which the microbiome can incite genetic damage that has potential to lead to cancer progression cascades. (Fig. 2)

Tight junctions are a critical first line of defense against intestinal bacteria. By blocking their passage between epithelial cells, tight junctions limit the use of inflammatory defensive mechanisms that would otherwise be needed to kill invading bacteria.

Microbiomic metabolism is another process that can incite DNA damage in the host epithelium. Bilophila wadsworthia is a common intestinal microbe that thrives in high bile acid intestinal environments caused by high-fat diets.

B. wadsworthia is also a sulfate-reducing microbe, releasing DNA damaging hydrogen sulfide (H­­2S) into the epithelial environment. H2S is capable of diffusing into cells, causing oxidative DNA damage and double-strand breaks that could lead to cancer progression.

A third mechanism of genetic damage caused by the microbiome involves direct invasion of the epithelial cells that line our intestines. Typically, epithelial cells are coated in a protective layer of mucin proteins, glycoproteins that line and lubricate the luminal apical surfaces of the epithelium, protecting against bacterial infection and abrasion. Coincidentally, my undergraduate research involved mucin proteins!

However, loss of extracellular mucin protein allows for the invasion of bacteria and viruses and triggers defensive signaling cascades. These signaling cascades often involve inflammatory and DNA damaging pathways that can lead to cancer progression if the cell is allowed to survive.

Infection and activation of macrophages by commensal bacteria triggers the release of clastogens, molecules that induce chromosomal instability, trans-4-hydroxy-2-nonenal (4-HNE) and tumor necrosis factor alpha (TNF-α). Similarly, clastogens are also released from myeloid cells and fibroblasts upon cellular irradiation. When released, these clastogens can enter cells previously unaffected (innocent “bystanders”, one might say) by the microbiome, thus indirectly damaging their DNA.

Increased 4-HNE levels have been found in murine (mouse) models of CRC as well as in human CRC. As cyclooxygenase-2 (COX-2) is involved in the production of 4-HNE, COX inhibitors may offer potential in the prevention of CRC. 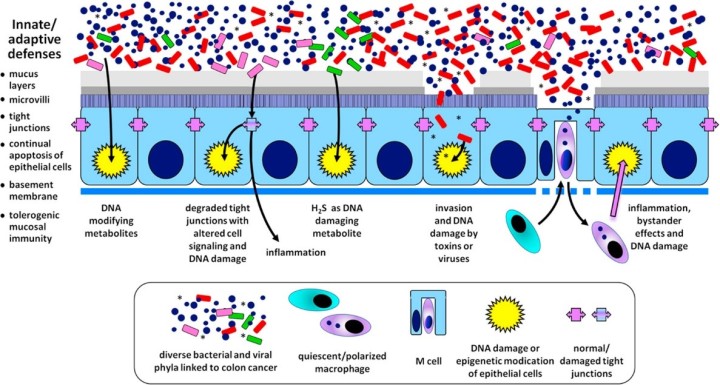 Though there are many pathways by which the human microbiome can harm host epithelial DNA, there exists an important mechanism by which they can serve a protective function against the initiation of cancer.

Certain species of bacteria ferment fiber and carbohydrates, forming butyrate as a byproduct. Butyrate, a short-chain fatty acid, is an inhibitor of histone deacetylase. This bacterial butyrate production, in conjunction with the Warburg Effect in cancer cell glycolytic activity, leads to the build-up of butyrate, powerful inhibition of histone deacetylase, and increased production of histone acetyltransferase, all resulting in cancer cell death and tumor suppression. (Fig. 3)

The epigenetic changes in CRC cells incited by the increase in available butyrate was shown to have a protective effect in preventing the formation of intestinal polyps in a murine model. 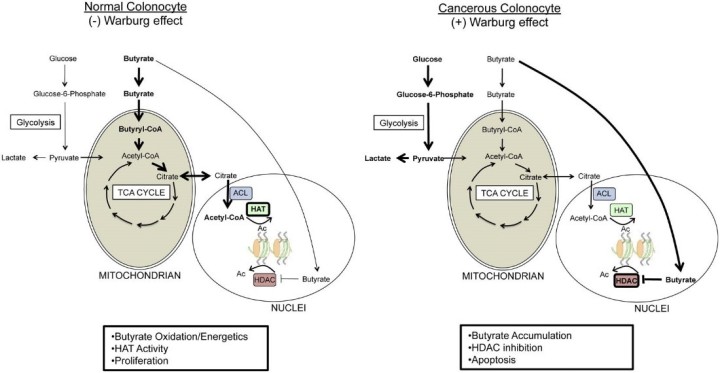 As researchers discover more about the interactions between the human microbiome and the humans in which it resides, we are beginning to form a greater understanding of how one’s intestinal ecosystem can affect their risk for certain diseases – CRC being just one example. However, we are not helpless to its influence. Just as the microbiome affects our health, the choices one makes in their life have the potential to change your intestinal environment, thus influencing which bacteria are allowed to live. Through elucidating the details of host-microbiome interactions, this area of research is a door to new ways to influence and exploit the gut microbiome and improve health. 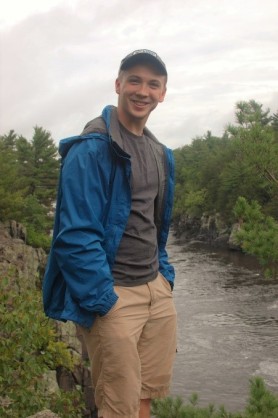 I am Andrew Lynch, a recently admitted PhD student in the Cellular and Molecular Pathology Department at the University of Wisconsin – Madison in the U.S. I blog about bioscientific literacy, history and developments at www.bioconjugate.blog.

This post is the fourth in our microbiome series. The first, Microbiome manipulation – full steam ahead? by Tilly Potter, was published in April. The second, Phyte club: inside the plant microbiome, by Gareth Raynes, and third, Lending a helping hand: Can probiotics treat inflammatory bowel disease?, by Ian O’Neill were published during May. If you are interested in reading more on this topic, you can also check out the April issue of The Biochemist magazine, which focused on The Microbiome.

One thought on “Cancer and the human microbiome: an emerging interplay”