This October, The Royal Swedish Academy of Sciences announced the 2018 Nobel Prizes. This years’ prizes in particular show how much of an impact basic science can have on medicine – investigating the how and why can give us insights into treatments.

James Allison and Tasuku Honjo awarded the 2018 Nobel Prize for Physiology or Medicine.

Dr James Allison, from The University of Texas MD Anderson Cancer Center, and Professor Tasuku Honjo, from Kyoto University, have been awarded the Nobel Prize for Physiology or Medicine “for their discovery of cancer therapy by inhibition of negative immune regulation”.

They discovered some of the ways our immune system can be turned off prematurely, and in doing so laid the groundwork for modern immunotherapy – the practise of using a patients’ own immune cells to fight their cancer. T cells recognise molecular signals of damage or infection and have a variety of switches on their surface activating various responses depending on what they recognise as a threat. Cancer is more difficult for our immune systems, because the disease is our own cells growing out of control, and our immune system is very good at recognising and not attacking our own cells.

Allison found that the CTLA-4 switch acts to dampen the T cell response, important in avoiding an immune over-reaction but not helpful in cancer. By blocking CTLA-4, there is no ‘off’ switch, so T cells are able to attack cancer until the tumour shrinks. A few years later, Honjo discovered PD-1, a receptor on T cells which when it binds to the PD-L1 found on many cancer cells causes the T cells to stop recognising the cancer as a danger. By blocking this interaction, the immune system can continue to recognise cancer cells and attack them.

Both CTLA-4 and PD-1 can be manipulated by drugs called checkpoint inhibitors, being developed by several pharmaceutical companies. Ipilimumab blocks CTLA-4, ensuring T cells stay ‘on’, while Pembrolizumab and Nivolumab target PD-1 and ensuring the cancer remains visible to the immune system.

In our recent issue of Emerging Topics in Life Sciences, Editor Francesco Marincola and a range of leading researchers explore the latest theories in expanding the next generation of immunotherapy drugs to include currently immune-resistance cancers.

Professor Sir Gregory Winter, Honorary Member of the Biochemical Society since 2007 was jointly awarded the 2018 Nobel Prize in Chemistry for his pioneering work in using phage display, with one half to Frances H Arnold for her work on directed evolution of enzymes and the other half jointly to George P Smith and Sir Gregory P Winter for their work on the phage display of peptides and antibodies.

A phage is a virus that infects bacteria, these viruses are simple and their DNA can be manipulated by scientists in the lab. Phage display involves modifying the phage’s DNA so that it carries the genes required to build a specific protein molecule. Once the phage infects the bacteria, the protein is produced and expressed on the cell surface and researchers are able to link genes to the proteins they encode.

Using this technique, scientists can insert the code for antibodies into the phage, editing the code and testing the resultant antibody for effectiveness and improving it in multiple rounds of testing – directing the evolution of the structure. Adalimumab, the first drug based on this method, was approved in 2002 and is used for rheumatoid arthritis, psoriasis and inflammatory bowel diseases. Since then, phage display has produced antibodies that can neutralise toxins, counteract autoimmune diseases and cure metastatic cancer.

Sir Gregory said “I was very interested in the idea of using antibodies against cancer. The immune system normally makes antibodies that recognises foreign agents, such as virus and bacteria, and does not make antibodies that recognise “self” and attack our own tissues. Generally this is fortunate, but the consequence is that it is difficult to make human antibodies against non-infectious diseases such as cancer or rheumatoid arthritis. To overcome these limitations, we created an artificial immune system using bacteria and bacterial viruses capable of generating a range of human antibodies against non-infectious disease. The approach was spectacularly validated by the creation of the antibody adalimumab (trade name Humira) for treatment of rheumatoid arthritis, and currently the world’s top selling pharmaceutical drug. When we had the ideas I was still a pretty basic scientist. As the huge potential of those ideas become clearer I started moving more of my efforts towards application.”

Sir Gregory said of his Nobel Prize: ‘It came as a bit of a shock, and I felt a bit numb for a while. It’s almost like you’re in a different universe. For a scientist, a Nobel Prize is the highest accolade you can get, and I’m so lucky because there are so many brilliant scientists and not enough Nobel Prizes to go around.’

Sir Gregory won the Biochemical Society Award in 2006, which recognized his role as a scientist who ‘successfully challenged dogma, created a new field of thinking, elucidated a paradigm or made a fundamental change to established thinking’. He is a genetic engineer best known for his research and inventions relating to humanised and human therapeutic antibodies. His research career has been based almost entirely in Cambridge at the Medical Research Council’s Laboratory of Molecular Biology and the Centre for Protein Engineering, and during this time he also founded three Cambridge biotech companies based on his inventions: Cambridge Antibody Technology – where phase display is routinely used in the development of new drugs (acquired by AstraZeneca), Domantis (acquired by GlaxoSmithKline) and Bicycle Therapeutics. 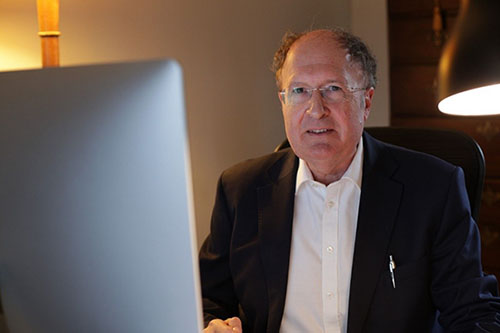 The 2018 Nobel Prize in Physics went to Arthur Ashkin, Gerard Mourou, and Donna Strickland for ground-breaking inventions in the field of Laser Physics.

Arthur Ashkin’s work has been described as ‘tools made of light’. Optical tweezers are scientific instruments that use a highly focused laser beam to provide a force to physically hold and move microscopic objects similar to tweezers. Using these tools, bioscientists are able to see and explore more of the molecular field than ever before, trapping single biological macromolecules in place and investigating their structure and movement. Use of optical tweezers in conjunction with Raman spectroscopy has allowed cells to be identified as either healthy or cancerous.

New Immunotherapy drugs hit the headlines – how do they work? https://scienceblog.cancerresearchuk.org/2014/06/02/new-immunotherapy-drugs-hit-the-headlines-how-do-they-work/