By Dragana Catici, University of Bath

Did you know that, just like us, other viruses can get infected with viruses too? Viruses have always challenged our views of life. These small obligate parasites, with sizes ranging from 20–400 nm, have been the cause of much pain and death throughout the history of life on Earth. At their core, viruses are nothing more than a protein shell protecting a nucleic acid (with some having a lipid later present too). Yet their effects range from cold (uncomfortable) sores to destroying armies and killing ~50 million people during the Influenza pandemic of 1918.

No one knows with certainty when viruses evolved or where to place them on the evolutionary tree of life. This has been the reason for much debate ever since the first virus was discovered over a century ago. The term ‘virus’ comes from the Latin word for poison (vīrus), as initially scientists failed to culture it using bacterial culturing methods and it appeared to be poisonous to the host it was found in.

With the development of molecular biology and genomics, scientists were amazed to discover just how varied viruses actually are and how they still continue to challenge our views on life. Life on Earth as we know it has all the information stored in DNA. Viral nucleic acids come in some shapes and sizes very unique in nature, from single- and double-stranded DNA to even single- and double-stranded RNA.

More recently, in 2008, a group of scientists discovered something even more fascinating about viruses: they too can become infected with other viruses! These are called virophages and the first one was discovered in an amoeba species (Acanthamoeba castellanii) infected by the Acanthamoeba polyphaga mimivirus (APMV). The host virus Mimivirus only grows in A. caselanii and is quite special as it is the largest known virus, with a chromosome of 1,185 kB (larger than many bacteria). And even more interesting, the amoeba itself does not appear to be affected by the virophage; the scientists reported that amoeba cells containing the virophage appear to be better off than the ones only infected by the Mimivirus. The virophage was given the name Sputnik, after Earth’s first artificial satellite. Sputnik can be found inside Mimivirus capsids (Figure 2a–2c) and can lead to abnormal growth and morphology in the host virus (Figure 2d–2f).

A handful of virophages have been isolated since Sputnik, and they all seem to have one shared mission: do not harm the host, but harm the virus infecting the host. The discovery of virophages could potentially open up a new avenue for the development of antiviral therapies. Could virophages be used in the future to target more complex viral infections, like the global crises of HIV and Zika infections?

Viruses and life on Earth have evolved hand in hand, one always fighting the other for survival. Are perhaps virophages the evolutionary answer to viruses becoming too powerful and host cells needing protection? With the rise in pathogen resistance to medication (both bacteria and viruses), could virophages be used in a new type of antiviral therapy? Vaccines containing active viral particles have been in use for disease like measles, mumps and rubella, but issues with immunogenicity and attenuation are still of great concern to clinicians and the general population. So far, all reported virophages have been isolated from organisms infected with giant viruses (mostly amoeba and zooplankton), from many different parts of the world, and it is too early to tell what role they could play as therapeutics. Genomic analyses show that a number of virophage-related elements can be found in non-aquatic environments too, including animal-associated habitats and even the human gut, all forming genetically diverse double-stranded DNA virophage groups.

Some scientists have suggested that virophages be classified as satellite viruses, a group of sub-viral particles similar in structure to virophages, that require a host cell to already be infected with a virus (also known as helper virus) before they can co-infect. Satellite viruses are found across the kingdom of life, and in humans include hepatitis delta virus, which requires co-infection with hepatitis B virus, for the expression of its antigen outer coating. Satellite viruses have very small genomes (200–1500 nucleotides), often derived from the helper viruses, a trait not shared by virophages. And unlike satellite viruses, virophages only have a negative effect on the other virus infecting the host, with no effects being reported for the host organisms.

Virophages, similar to viruses, are often viewed in a negative manner, and are almost always disregarded in evolutionary studies. Yet throughout the history of life on Earth, they have played a major role in shaping evolution and driving the development of traits that allow for survival of the fittest. Could virophages have evolved to allow horizontal gene transfer between viruses, similar to what bacteria achieve using plasmids?

At the moment, the study of virophages is still in its infancy and more research is needed to better understand their full potential and see what fundamental questions about life they can help answer. 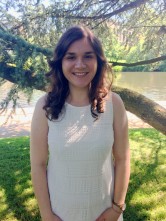 About me
Dragana Catici is a final year PhD student at the University of Bath studying the dynamics and structure of the human protein NEMO. Her main interests lie in how proteins fold and function inside cells, and in her spare time she likes to keep up to date with space research and viruses.