There was a time where scientific debate only happened in the letter pages of national newspapers. However, as research developed and became more specialised, scientific discourse moved into journals found only in institutional libraries, creating barriers between those undertaking the science and the wider public. 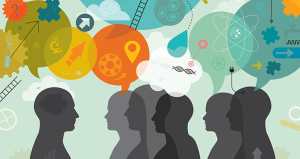 More recently, the discourse has moved to a two-way dialogue with the public; engagement rather than outreach. This shift speaks to some of the reasons why communicating science outside of the lab is so important. There is hardly a single societal issue or policy decision which does not involve science in some way, from the design of medicines, transitioning to a green economy or tackling food poverty.

This is exemplified by looking back to debates involving Genetic Modification (GM) in the 1990s-2000s, which resulted in the increase of public fear and suspicion over the applications of these technologies and their underlying ethics. An early open dialogue via continuous and reciprocal engagement around more recent developments in genetic technologies, such as synthetic biology, should help ensure informed and evidence-based discussions around how, and to what extent, we as society should decide to use these technologies.

The majority of scientific research in the UK is conducted using public funding, be it via national or international governmental funding from tax, or research conducted with funding from charities. Public engagement with research can help ensure a level of accountability to the public and help make the case for continued funding and support. Further, engaging the public with current research can help inspire the next generation of scientists. Engagement can play a key role in helping to break-down stereotypes such as “what a scientist looks like” and “only certain people do science” which ultimately will help increase diversity within the scientific workforce, an outcome that is better for all.

Equally, recent technological developments and the increased use of social media have arguably resulted in an even more important role for science engagement in equipping varied publics with tools that allow them to look at evidence critically and tell truth from fiction or manipulated evidence. Of course, the same increases in the use of social media and increased communication have enabled a proliferation in the range of methods by which to engage with the public. These include the ease of blogging, podcasting and sharing videos in addition to live events such as local fairs and festivals or more larger events nationally.  However, it requires some thought to choose your method of engagement and to make sure your engagement is effective.

One of the first steps is to think of what audience you are trying to reach, as the ‘public’ is in fact many different audiences with a variety of interests and needs. An example audience is policy makers, who routinely need to make decisions on issues where science plays a role, or which will affect the science directly. This often involves the digestion of detailed information from scientists to help shape policy by people who do not have a scientific background (less than a sixth of the current UK MPs have any background in STEM – though that is better than previous parliaments). How we, as scientists, engage with policy makers about areas of our expertise will be different from communicating with the audience at a scientific meeting or indeed a school group.

To help give an introduction to, and provide some of the tools to go about, engaging the public with your science, the Biochemical Society has created an online training course, which is FREE for members (£50 for non-members). The course runs from 12 October 2020. To join this course, visit our website.

Dr Mark Roberts works at the University of Oxford in the biochemistry department. Mark is a former member of the Biochemical Society’s Education Committee and works as a STEM Ambassador. He plays an active role in promoting molecular bioscience to children and the public.