Part 1: The Colourful Community of the Colon

This is the first installment of my three-part series that investigates the correlative link between the gut microbiota and our weight. Obesity is a worldwide epidemiological epidemic and current interventions, both medical and lifestyle, are failing to thwart its increasing prevalence. The discovery that the gut microbial community is implicated in our expanding waistlines has spurred attempts to manipulate its composition – with novel procedures exploding onto the wellness scene.

Part 1 takes you into the realm of the microbial communities that thrive within us; we learn who they are, and why they are so important to our health. 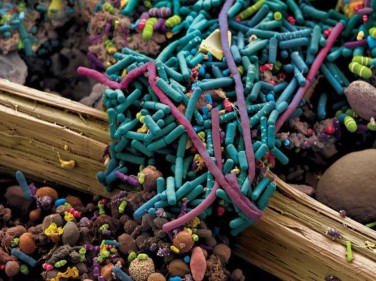 You are not entirely, you. As you read this, a whole ecosystem of bacteria, fungi and viruses thrives quietly away throughout you, perfectly suited to the multitudes of niches that our bodies provide. Among all the locations in the body, the gut is where much of this microbial ecosystem, our microbiota, resides. The microbiota has an array of vital functions for our health such as, helping us digest our food, producing vitamins and minerals, removing dangerous chemicals and protecting us against infection. This series will focus on the connection between the gut microbiome and metabolic syndromes. Looking at the delicate partnerships between them and us and how disruptions are at the expense of our health. We will see what we can do to remedy these problems by manipulating the microbiome and whether products from probiotics to “poop-pills” have any traction when facing scientific scrutiny.

The microbiota in its most comprehensive definition, is the collection of microbial communities that exist within a specified ecological environment. The composition of the microbiota varies between individuals, with each of us possessing a uniquely proportioned cocktail of species.  Consequently, what constitutes a health- or disease- associated microbiota is difficult when based only on species identity. Rather, the analysis of the functions they perform is a superior means of characterization and offers an understanding of their role in our bodies. Their functions are inferred from the genetic make-up of the collective microbiota which is referred to as the microbiome. This explains why two microbiotas which differ extensively in their composition, can both be associated with health – they can accomplish the same function in the host as each possess a set of identical activities. Given the functional importance of the microbiota, a healthy or balanced microbiota is one harbouring a range of species capable of a myriad of activities.

The bacterial component of the microbiota is the most pertinent to the discussion of the microbiota’s function in the body. Collectively, a total of 38 trillion bacteria occupy the plethora of niches both inside and outside our bodies. Between 1,000 and 1,150 bacterial species are potential colonisers of our gut, with the average person harbouring 160 species. The composition of the gut microbiota is emerging as an etiological (causative) factor implicated in numerous health problems from the more intuitively expected gastrointestinal disorders, to the least expected, metabolic syndrome. Metabolic syndrome is an umbrella term which describes an amalgam of disorders known to increase the risk of developing cardiovascular disease (CVD).  Amongst elevated glucose level in the blood, termed hyperglycaemia, (most commonly manifested as diabetes) dyslipidaemia, (abnormal triglyceride levels) and hypertension (high blood pressure), obesity is a condition which is becoming increasingly problematic in the domain of public healthcar 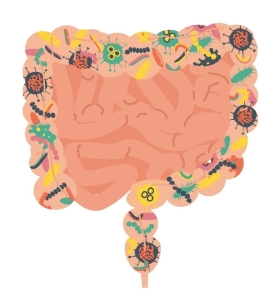 e. With obesity now the second biggest preventable cause of cancer, attempts to tackle this burgeoning issue have rendered traditional weight-loss advice woefully ineffective. More recently, the etiological contribution of gut microbiota to obesity specifically, has accrued considerable attention in microbiological research. Owing to its adaptability, the microbiota can alter its composition in response to a host of changes, namely our diet. If we know a poorly functioning microbiome is linked to poor weight management, then manipulating it by altering what we eat, offers an appealing means of weight loss.

The story of how the microbiome has come to be implicated in the accumulation of unwanted fat mass spans over a decade. Part 2 will inspect the notable research outputs that have surfaced in the field of the microbiome; most crucially the curious dietary preferences our microbiota display.

The second instalment is now available to read here, you can also read the third instalment here

I am a postgraduate student at the University of Manchester. Having completed a degree in Biochemistry, I am now pursuing a career in the field of science and medical communications. In my spare time, you can find me sweating it out outdoors, crocheting in a corner and baking up a storm (not necessarily in that order…or at the same time).

3 thoughts on “OBESITY: MANIPULATING OUR GUT MICROBIOTA IN THE QUEST TO BE LEAN”