Rotors were used in early combustion engines and are still used in electric engines and turbines today. That means that when we first built cars, back in 1886, they used rotors in their engines simply because that was just what worked.

ATP synthase was discovered in 1960 as an essential enzyme in aerobic cellular respiration, but it wasn’t until the 1990s when John E. Walker partnered with crystallographers to determine its structure.

That led to the realisation that our bodies completely depend on two nanoscale motors in the final step of aerobic cellular respiration.

Perhaps the most stereotypical representation of high school science is the statement, “mitochondria are the powerhouse of the cell.”

And it’s true. A simplification, but every second you exist, your body consumes energy and then runs round the clock to regenerate it within the mitochondria. In fact, an average human produces 2.0 million kg of ATP (adenosine triphosphate) in their lifetime from ADP (adenosine diphosphate) and Pi (phosphate group) via cellular respiration.

The main stages are glycolysis (which actually occurs outside the mitochondria), pyruvate oxidation, the citric acid cycle, followed by oxidative phosphorylation with an electron transport chain and then finally, we’re down to chemiosmosis and ATP synthase, the final steps in turning lovely carbs into energy! 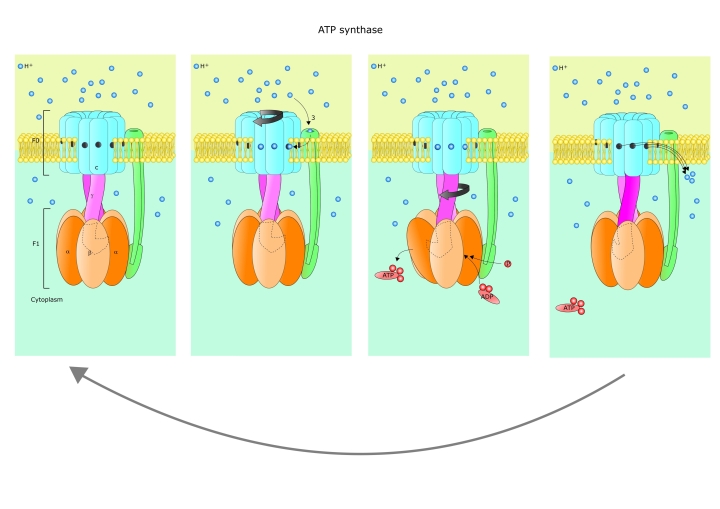 Every ‘step’ is just another series of chemical reactions to generate different products and by chemiosmosis, we’ve just got a large number of hydrogen ions (H+) on one side of a mitochondrial membrane generated from the electron transport chain and very few on the other side.

All those H+ on one side of the membrane are pretty cramped and they really want to cross over onto the other side, but it’s not quite that easy. Their only route across is through the ATP synthase.

So, eager to cross, a H+ ‘jumps’ onto the ATP synthase, binding to the F0 motor of ATP synthase, causing it to change shape and spin slightly to allow another H+ on. This spins all the H+ over to the stator (just like the stator in a mechanical motor) and which then dumps them over to the other side of the membrane.

This spinning, spins the axle, thereby causing the F1 motor to spin as well, but it doesn’t bind H+. Instead, it binds an ADP and Pi molecule in each section. As the ATP synthase changes shape, it catalyses these substrates to reform an ATP molecule.

This ATP molecule then goes off into the cell, provides energy for a reaction by being converted back to ADP and Pi and then has to head to a mitochondrion to begin all over again.

The absolutely remarkable aspect of all of this is that one of your cells can use and regenerate its entire ATP pool (generally 500-750 ATP per cell) up to 3 times per minute which means that these tiny little motors are working overtime.

Then we can look back at how we use motors. Large, clunky, slow, noisy motors representing our mechanical prowess while inside our body millions of tiny, perfectly-oiled motors spin to keep us alive.

I’m an undergraduate biochemistry student at the University of Queensland who wants to go into research and also become a ‘proper’ science writer! I love to learn about science and how things work with particular fascination towards proteins, enzymes and ‘molecular machines’. To that end I’ve got a blog about interesting science, Scientia Potentia Est. You can also find me on Twitter @ArwenNugteren.