By Louise Corscadden, University of Leicester

Recent news headlines have highlighted the rise of extreme air pollution levels globally, from Delhi to London. It has become hard to ignore the thought that the very air we breathe can harm us. The World Health Organisation estimates that 7 million people annually will die a premature death due to air pollution and the number is likely to rise as pollution levels increase. In our research, my team looks at how particulate matter, a component of air pollution, affects bacteria which cause pneumonia. While there is an understanding of how air pollution affects the respiratory tract from the nasal cavity to the lungs, less is known about how air pollution affects the bacteria which cause the infection.

What is particulate matter? Why should I care?

In recent years, the effect of particulate matter on the human respiratory system has become better understood. Exposure causes an inflammatory and oxidative stress response recruiting a variety of immune cells to the area. These responses cause biological features similar to that of asthma and make it easier for bacteria to bind to respiratory cells. This can increase the chances of a respiratory infection like pneumonia. The work of my lab aims to bridge the gap in the knowledge of what is occurring in infectious bacteria when exposed to this kind of pollution.

Our model bacteria are two common causes of pneumonia, Streptococcus pneumoniae and Staphylococcus aureus. S. pneumoniae was responsible for 14.5 million cases of severe disease in 2000, while S. aureus respiratory infections are typically associated with viral infections such as influenza or “the flu”. Before causing an infection, both S. aureus and S. pneumoniae tend to colonise or settle in the human respiratory tract without symptoms. It’s thought that this occurs through biofilm formation. As seen in the figures below, a biofilm is a 3D structured community of bacterial cells which serves to protect bacteria from their environment.

What does particulate matter do to the bacteria?

We have found that in contact with black carbon, the biofilm structure of both types of bacteria drastically change. For S. pneumoniae, large channels form (figure 1, B) in a previously uniform structure (figure 1, A).

How these changes in biofilm structure affect bacterial behaviour become apparent when S. aureus and S. pneumoniae are exposed to a range of standard antibiotics. Unusually, S. aureus becomes more sensitive to the antibiotics oxacillin, daptomycin, and tetracycline. In contrast, black carbon contact causes S. pneumoniae to become more resistant to penicillin G and is found to survive better when exposed to the antibiotic. The implications of these discoveries could have an impact on the efficiency of antibiotic treatment in humans who live in highly polluted areas.

We have also extended our research to look at the effects of air pollution exposure on a mouse model. Mice inhaled a solution of either S. pneumoniae alone or S. pneumoniae with black carbon. After 7 days, only mice who had inhaled both bacteria and black carbon were found to have bacteria in their lungs. This indicated that black carbon helped S. pneumoniae to move from an area associated with colonisation (the nasopharynx) to the lungs where it could cause pneumonia. Could this be a possible mechanism as to why so many deaths are attributed to air pollution associated pneumonia?

These results are part of a handful of publications on the subject of how air pollution effects the bacterial cell, but the message is clear; rising pollution levels don’t just affect us, but also the bacteria who colonise us. More and more of us are living with high levels of air pollution and unless we can characterise how more polluted, extreme environments are affecting the bacteria around us, it becomes harder to fight infection. 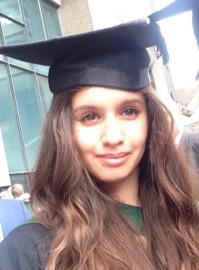 The multitudes of people were not wrong when they told me that the PhD would “fly by”. Upon entering my second year, I am left with 1.5 years to go. The topic of my work is how air pollution affects bacterial behaviour. Before taking my PhD position at the University of Leicester, I completed a Master’s degree in Medical Microbiology at the London School of Hygiene and Tropical Medicine and a Bsc in Biomedical Sciences at St George’s University of London. When not in the lab, I can be found cooking up a storm in the kitchen or sewing something outrageous. I can be contacted on Twitter via my email address, lc378@leciester.ac.uk.

This post is the second in our extremes series. The first, Biofilms: the ultimate survival mechanism by Debosree Pal, was published earlier this month. If you are interested in reading more on this topic, you can also check out the December issue of The Biochemist magazine on the theme of extremes.