Have you ever consulted a phrase of poetry to mend a wound cut by romantic abandon? Perhaps a line or two from Ovid, García Lorca, or Byron can soothe a festering gash. But would you ever take counsel from a poet to succour some sores down there – from a scourge named syphilis?

If you happen to live in renaissance Italy, you would be perfectly justified for doing so.

A young Veronese polymath by the name of Girolamo Fracastoro (1478-1553) came to the conclusion that syphilis was caused by really tiny transmittable agents, centuries before the first formal articulation of the germ theory of disease. However, at that time, treatises were not published in the usual form that we enjoy (or suffer, take your pick!) today. So how did Fracastoro spread his ideas? Through poetry.

Fracastoro’s 1530 epic poem Syphilis sive morbus gallicus (Syphilis or the French Disease) was the first instance wherein the disease was transmitted to literature. In Neo-Latin romantic fashion, with a dab of Virgilian flavor, Fracastoro personified syphilis in the form of a farmer named Syphilus, whose offence against the god Apollo led to his punishment by pestilence. Thus the disease that plagued much of renaissance Europe was baptized: “From him the malady receiv’d its name”, and from Syphilus, “The neighboring shepherds catcht the spreading flame.”

But how did this disease reach European shores? Fracastoro offers one view among many that enjoyed favour in renaissance times – that it was brought to Europe from escapades into the new world:

“If from the Western Climes ’twas wafted o’er, When daring Spaniards left their native shore.”

Of course, Fracastoro was not of the opinion that syphilis came from Spanish explorers (Nobody expects the Spanish affliction!). Neither did he think that the pain from Spain stays mainly in the plain, for syphilis had been recorded to have had several outbreaks in Europe, even in parts of Africa which had no contact with the west. He later wrote an extended analysis of the disease in a 1546 essay, wherein he suggested taking a geo-historical perspective: “So you wish to go back, by an analytical method, to the source and origin of this disease? First of all look at how many countries have been struck and look at how many have been afflicted.”

Fracastoro was correct in his advice to consult history instead of cultural canards. After all, it was all in bad taste: the Italians called it the ‘French disease’; the French called it the ‘Neopolitan disease’ (after invading Napoli, many of Charles VIII’s soldiers contracted syphilis); the Russians called it the ‘Polish disease’; while others just said that it hurts.

Despite arguing for the correct method, Fracastoro, arrived at the wrong conclusion. Having glanced at the geographical nature of the disease, he noticed something ubiquitous in the areas where outbreaks were spontaneous and frequent:  “In order to have generalized itself in the manner in which it did, it is evidently necessary that the mysterious agent from which it has originated be contained in the air, in the air which bathes and envelops the whole world.” He believed that syphilis was borne by air. For him, syphilis came about from corruptions in the atmosphere, resulting in contagious germs – more akin to chemical criminals than the vibrant microscopic suspects of microbiology.

Obviously, Fracastoro was mistaken. The court of modern epidemiology has found the bacterium Treponema pallidum guilty for the spread of syphilis. The judgement of pallidum should not be a case against Fracastoro, though, for in his attempt lies two lessons than posterity can learn from.

First, Fracastoro advocated and urged for a material analysis of disease. His was an honest attempt to actually know the causes of syphilis without resorting to heavy handed assumptions. It may have led him to the wrong conclusion, but in doing so, he led the important first step towards modern materialist medical thought, away from the Hippocratic paradigm of the four humors. Epidemiology entered the social realm and disease now had a historical dimension for study.

Second, Fracastoro’s poem serves as an illustration that science and art need not to be separate arenas in society. What Fracastoro emphasized is the necessity of building and conveying knowledge around a language that is both accessible and appreciated by the learned and the lay. Literary acumen need not be abandoned for scientific exposition – in fact, both should be equally employed to propagate understanding. The gap between the two is a lot smaller than people think.

Syphilis is surely a sore topic to write about, much more as a subject for verse. Yet, Fracastoro went on and wrote an epic poem based on it. In doing so, he proved that there is nothing more beautiful than mankind’s yearning for knowledge and illumination- even if it meant turning syphilis into a work of art. Fracastoro tapped on a very human desire for storytelling. And if we think about it, is not science a beautiful story to talk about in verse? Perhaps we can borrow from Browning a hint as to what we can do with science:

How do I write thee? Let me count the ways. 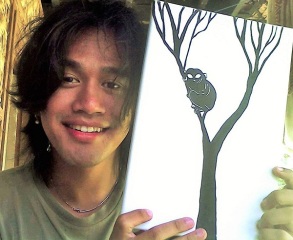 I am a biologist from the Philippines who loves orangutans and spitting cobras (and of course, the magical biochemistry of their venom). Outside science, I have a lifelong passion for ancient history and the poetry of Publius Vergilius Maro aka Virgil.

Please check out my blog – Scidols – and you can also find me on Twitter @pipporanito.

2 thoughts on “I wandered lonely as syphilis”