By Sabrina Hossain, University of Birmingham

Global warming is undeniably one of the greatest issues of our day and age. From the ‘fake news’ nay-sayers to the cohort of scientists at the forefront of the battle; global warming is the hot topic on everyone’s lips. Now a majority of you reading may be concerned that this will be just another blog post on the mechanics of global warming accompanied with the obligatory all so familiar fearful statistics of the consequences. However, what if I were to tell you that there is a darker, less apparent concern to global warming lurking?

As global temperature rises, ecosystems change and thus begins the redistribution and re-emergence of diseases. The Zika virus, belonging to the Flaviviridae family of viruses, is transmitted into its human host through a mosquito vector, in this case the mosquito genus Aedes. According to the World Health Organisation, the first Zika virus outbreaks were recorded in 1952 in Uganda and Tanzania with symptoms including headaches, joint and muscle pains, and fevers. Last year, the Zika virus re-emerged in new areas causing an epidemic and now has been linked to complications including microcephaly in newborns and Guillain-Barré syndrome, among others. 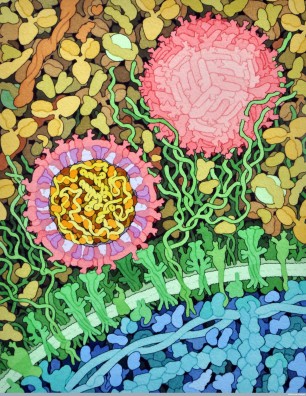 The spread of diseases like the Zika virus has been correlated with global warming which allows for more mosquito-borne diseases to fruitfully reproduce in new areas.

Asides from providing more disease- accommodating climates, how else is global warming going to impact health? For this one, we are going to need to think deeper, and I mean deeper in the physical sense.

The beauty of ice is its ability to preserve whatever it may capture and unfortunately for us this includes forgotten dormant viruses and bacteria trapped in icecaps from over a thousand years ago. Rising global temperatures leads to melting ice and the potential release of these pathogens.

Has it happened yet?

Yes. Last year, the community of Salekhard, Russia was plagued with an anthrax outbreak affecting around 110 people as well as killing a 12-year-old boy. The bacteria Bacillus anthracis was released into the air through a 75-year-old reindeer carcass recently exposed due to unusually warmer temperatures exhibited. As the permafrost melted, the perfectly preserved anthrax was able to regain its viability and spread.

What should we expect to be hiding under the ice?

Well that’s the problem, it’s a mystery as to what we should expect. Newly exposed pathogens may not even be viable or able to infect humans (for example, a giant virus extracted from the Siberian permafrost in 2014 is infectious only to amoeba). In fact, the preservation of past diseases in ice can be used to progress research. In 2005, scientists successfully sequenced the genome of the H1N1 influenza virus that caused the Influenza Pandemic of 1918, killing between 20-40 million people. The retrieval and isolation of the virus was proposed in 1950 from PhD Microbiologist Dr William Hale, who suggested searching the frozen graves of those infected in Alaska. Although suggested in 1950, the retrieval of enough genetic material to sequence the virus was not done until 1995.

A more exciting discovery from permafrost is the recently discovered group of ‘giant viruses’. These have broken the rules for when it comes to categorising viruses, blurring the line between what constitutes bacteria and viruses. Two notable viruses in this group include the Pandoravirus, which currently has the largest viral genome on record of up to 2.5 megabases, and the Pithovirus which has the longest viral length of 1500nm. Pithovirus is somewhat of a mystery to the science community. Unlike most viruses, the Pithovirus has the rather unique ability to build its own DNA replicating machinery within the host cell and therefore does not rely on the host cell machinery to reproduce. Also, the virus’ proteins also appear to be different from any known viruses, with only a third being recognisable.

So the question remains, what other dormant pathogens could be hiding under the ice?

I am a soon to be 3rd year undergraduate student studying Biochemistry at the University of Birmingham, United Kingdom. You can find me on Twitter @beaniehos.

This post is the second in our emerging diseases series. The first, Are we taking the epidemic nature of diabetes seriously enough?, by Debosree Pal was published earlier this month. If you are interested in reading more on this topic, you can also check out the June issue of The Biochemist magazine.

One thought on “The darker side to global warming?”