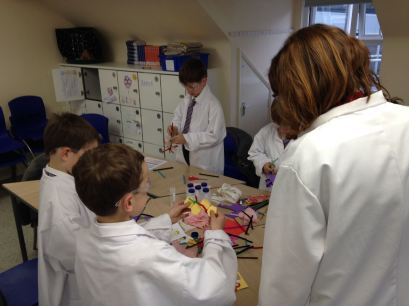 What were our aims?              We wanted to design a fun, interactive activity for children demonstrating how scientists play a variety of important roles in society.  To coincide with the 2016 Olympics still being fresh in many children’s memories, we designed an activity called ‘Dirty Dopers, cheating or competing?’ which focused on the biochemistry behind performance enhancing drugs in sport. The aim of the session was to educate students about why certain drugs are banned in sports, the science behind how they work, the effects on the body and how they can be detected. The hands-on experience involved a simple scientific investigation where scientists (us) recruit the help of ‘doping detectives’ (students) to determine which fictional athletes have committed the crime of doping by taking performance enhancing drugs.

Why did we want to do this? We wanted to get children interested in science and biochemistry by giving them the chance to do their own experiment. We felt that the subject of doping in sports was topical at a time close to the Olympics.  Sports have a universal appeal and with so many reports in the media of high profile cases of athletes found doping, we thought it was an engaging topic.  We also wanted to demonstrate that not all scientists are old men with white beards!

We introduced why sports are important, what doping is, how these drugs work to improve performance, why it is bad for your body and the implications if caught taking them. We then described the experiment, explaining that it is a simplified version of what scientists do in the field. They were provided with athlete’s profile cards describing their training, results, blood count and personality changes. They then had to test each athlete’s ‘urine’ for the presence of ‘illegal drugs’ using a colour-change reaction. Students were then asked to consider possible flaws in their conclusions, introducing them to the importance of experimental design and controls in the interpretation of results. We deliberately didn’t provide one athlete’s urine so students had to use evidence from the worksheet alone to determine whether they thought they had been cheating. Almost all students believed that this athlete’s failure to provide a sample indicated his guilt, teaching the importance of gathering all relevant data when analysing results!

After discussing the results with the students we provided further information about the chemistry behind natural and synthetic steroids. We gave examples of natural steroids in the body (e.g. cholesterol) and explained that the structure of synthetic steroids mimic hormones in the body e.g. testosterone that increase athlete’s muscle mass but at the expense of their health (strain on their heart, increased aggression and other detrimental mental problems). Students then made their own unique steroid from card and pipe cleaners to take home.

To wrap up the session and initiate a discussion about morals and ethics of doping in sports we read out quotes from (fictional) athletes and discussed whether they thought a cheater or a competer might have said them and why. We then discussed the types of jobs that scientists do drawing on our own personal experiences to get children interested in careers in biosciences and answered their questions. We finished by confessing that the urine they tested was not real since almost every child asked us! 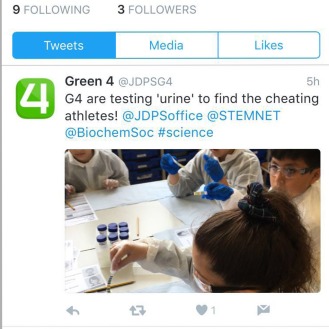 Students said it was fun and interesting and they especially liked doing their own experiment. We got the opportunity to communicate about science with non-specialists which was fun and rewarding and useful to get a fresh perspective on topics through the eyes of young people. We learnt that children are inquisitive and understand principles better if they are interactive. If we had to give advice to anyone designing an activity for children aged 8-10 it would be ensure it is topical so the children can relate to it, make sure it’s interesting and ideally also fun!

Cassandra Terry and Jessica Sells are research scientists at the Prion Unit based at UCL’s Institute of Neurology. Elizabeth Sawyer and Claire Sarell worked at the Prion Unit until recently. In addition to being scientists, Cassandra (c.terry@prion.ucl.ac.uk) and Jessica (j.sells@prion.ucl.ac.uk) are the newly appointed public engagement coordinators for the unit, due to move to their new UCL institute on Cleveland Street Winter 2017. Funding for this activity was provided by a Biochemical Society Scientific Outreach Grant.