Iris, the Greek Goddess messenger between humans on Earth and the Gods on Mount Olympus, has made an entry into human biology by providing inspiration for the name of a skeletal muscle-derived hormone. Irisin belongs to the class of myokines, which are molecules released by skeletal muscle in response to exercise and act as messengers to other tissues, including liver, fat and the brain. Given the beneficial effects of exercise, particularly in the context of obesity and Type 2 Diabetes, major efforts have been invested into discovering myokines of potential therapeutic value. Irisin seems to have it all, with multiple animal studies confirming its metabolic benefits such as lowering of blood glucose and lipid levels.

Irisin’s metabolic effects are partly explained by its ability to change the property of fat tissue. Mammals have two types of fat: white and brown. White fat is more common and is used to store energy. Brown fat, predominantly found in young animals and infants, dissipates the energy stored in fat molecules as heat, a process known as ‘thermogenesis‘. Consequently, researchers are working hard to harness the power of brown fat to increase energy expenditure as a solution to the current obesity epidemic. This has led to the discovery that certain conditions can transform white fat cells into “beige” or “brite” (brown in white) cells. Irisin has now been added to the list of molecules capable of inducing such transformation.

The story does not end here. Irisin has also been reported to act on the liver, brain, kidney and the endothelial cells lining our blood vessels. To understand the details of such regulation, studies are now examining the molecular mechanisms underlying the reported effects. In an article by Liu et al., published in the journal Clinical Science, these mechanisms were explored in the liver, one of the key organs involved in blood glucose regulation.

In Type 2 Diabetes, the hormone insulin is no longer able to suppress the liver’s production of glucose, a process known as gluconeogenesis. Using a mouse model of Type 2 Diabetes, Liu et al. showed that irisin can reduce gluconeogenesis and promote the storage of glucose into liver glycogen, a readily-mobilised chain of glucose molecules. As a result, diabetic mice injected with irisin for 2 weeks had improved whole-body glucose regulation. At the molecular level, increased levels of glycogen and reduced gluconeogenesis were driven by regulation of key enzymes. For example, the biochemical cascade triggered by irisin caused the addition of a phosphate molecule to the enzyme glycogen synthase kinase (GSK). This prevents GSK itself from adding an inhibitory phosphate to glycogen synthase, the enzyme linking individual glucose molecules together to form glycogen. This is a classic example of phosphate-dependent activity regulation of intracellular enzymes, in this case increasing the activity of glycogen synthase. Such effects are rapid, occurring within minutes, in contrast to the longer timescale required for irisin to change the cellular concentrations of enzymes involved in gluconeogenesis (glucose production) by turning their synthesis off. 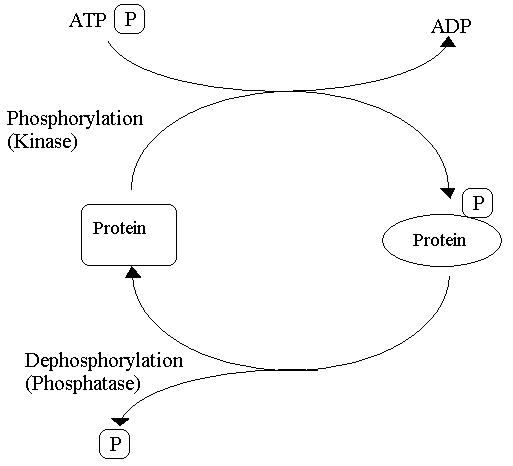 Most cell signalling events depend on the reversible modification of key proteins with phosphate groups derived from the molecule ATP. Proteins known as kinases add phosphate groups, whereas protein phosphatases remove them. This usually occurs in response to specific signals (CC BY-SA 3.0, https://en.wikipedia.org/w/index.php?curid=1517034).

Does this mean that irisin is the holy grail for the obesity epidemic and the closely linked increase in Type 2 diabetes cases? Not quite yet. Despite promising results, most irisin studies have modelled its effects in mice and caution should be exercised when extrapolating such findings to humans. Crucially, there are major limitations associated with current methods to measure irisin, at some point even leading to doubts about its existence in humans. Thus, little is known about the type of exercise that most potently increases irisin release from active skeletal muscle cells and whether obese patients or those with Type 2 diabetes will experience metabolic improvements when treated with irisin. At the molecular level, we still don’t know if there is a receptor for irisin on the surface of responding cells or if irisin triggers its actions by a yet unknown mechanism. It is almost certain that the rapid advancement of biomedical research will give us the answers to these questions within the foreseeable future. In the meantime, we can remain hopeful that irisin may one day be part of a new generation of therapeutics for obesity and human diabetes prevention.

I am a 2nd year Wellcome Trust PhD Student in Metabolic and Cardiovascular Disease at the Institute of Metabolic Science in Cambridge. You can follow me on Twitter (@RalitsaMadsen) or via my science blog ralitsamadsen.wordress.com.

3 thoughts on “The metabolic benefits of exercise”