Did you know that there are fewer human cells in our body than bacterial cells?

For the human body to contain anything other than our own cells has always caused controversy; however, the idea of a second genome has been around for a while. Since 1972, scientists held the opinion there was a ratio of 10:1 microbe (single celled organisms)-to-human cells in our body, making us only 10% our own cells! This was shocking and incredibly controversial at the time. However, recent research has found the ratio to be closer to 1:1, or more specifically only 43% of the cells in our body are our own, the rest is a mixture of bacteria and archaea and other microbes. These microbes, mainly found in the gut, have been nicknamed the ‘second genome’ from the idea humans have two genomes. The native human genome, and the more diverse set of genomes carried by the human microbiota.

The key difference between the first and second genome is DNA is passed on through generations for the first genome. Meaning if all your ancestors have brown eyes, you will also have brown eyes (ignoring mutations). DNA is stable to allow our genes to pass onto the next generation, and only ever-changing slightly through mutations. Whilst the microbiome can and will vary over time. In fact, the only time when the microbiome acts in a hereditary manner is during birth; babies will inherit some microbes from their mother. This is a very important first stage in training the baby’s immune system to deal with pathogens (microorganisms that can cause disease) outside the womb. Babies born via the vagina will experience more of the mother’s gut microbes and hence their immune systems are better prepared for the next few years. One important example is the ​Bifidobacterium ​genus; bacteria that is found in the gut and vagina of mammals and helps the baby digest the breast milk, meaning more nutrients absorbed and hence a healthier baby. However, for babies​ ​born from a caesarean section, often the membrane surrounding them won’t rip and hence the first microbes they are introduced to are ones that live on the skin and are potentially harmful rather than useful. This is one of the theories as to why in general babies born through a caesarean section are more likely to develop asthma and allergies as they have weaker immune systems.

The Effect of the Second Genome

Overall, the microbiome plays a very important role in all areas of life: from digestion, the immune system, manufacturing vital vitamins and even mental health, working very similar to human cells. Some produce enzymes to digest foods, others will produce electrical stimuli to send signals to the brain (this is especially important when understanding the link between mental health and microbes). However, within one’s gut there is a diverse mix of microbes (roughly 2-20 million total), some benefitting health and some if present in too high of a concentration adversely affecting health. For example, a high concentration of bacteria from the ​Acamancia ​genus digests fats, whilst the phylum of bacteria, ​Firmicutes, ​absorb fat and hence people with higher concentrations will gain weight more readily. However, some microbes have both positive and negative consequences; an interesting example being ​Blautia obeum ​as it contributes to inflammation as the bacteria favours that environment, but it is also important in the recovery process when infected with certain pathogens​. ​ Therefore, a diverse mix of microbes is preferable, especially as some may not have obvious functions. 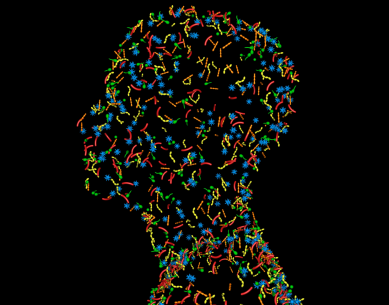 The gut microbes also have a direct link with mental health, including stress, depression and eating disorders. This is perhaps the most shocking link between the microbiome and the human body as bacteria in the gut can affect decisions made in the brain. The idea of a gut-brain axis, a direct link between the gut and the brain, works by sending direct signals using hormones and neurotransmitters (chemicals that cause a nervous impulse). The idea of the gut-brain axis first became prevalent in 2004, where a study in Japan bred normal mice and mice with no microbes, essentially ‘pure’ mice and then forced them to experience a stressful situation. The mice with no microbiome and hence no gut-brain axis showed 20% more stress hormones than the mice with the bacteria. Then the mice with no bacteria were exposed to a monoculture, meaning that they had one species of bacteria living inside them. Even with one species of bacteria, the percentage was immediately reduced. This suggested a direct link between the second genome and the brain. Finally, they used mice to show the link for mammals being stressed in their early life having a very different gut bacteria to mammals with less stress in their early years. This evidence suggests that certain bacteria can even have negative effects on mental health. This link is already being used in tackling mental health such as depression. Exercising and eating a balanced healthy diet improves the amount and diversity of microbes in the microbiome. Therefore, a greater population of positive microbes will release certain neurotransmitters such as serotonin or phenylethylamine in high quantities and can improve happiness.

In conclusion, the second genome is a vital and under-researched part of what makes us human. In a world with rising antibiotic resistance and fewer new antibiotics being found each year, medicine utilising the gastrointestinal fauna is essential. It could be one of the most progressive advancements in medicine since penicillin was discovered in 1928 and hence needs to be researched and understood more, so scientists can manipulate it further.

About the author:Colm Lambert is a first year undergraduate at the University of Oxford studying towards a Master’s in Biochemistry.

2 thoughts on “What is the Second Genome and how does it affect us?”