The dominating spectacle of dinosaurs and dodos seemed to spark the imagination of guests at the British Society for Gene and Cell Therapy’s annual Public Engagement Day, this year held at the Museum of Natural History in Oxford.

Biochemical Society members Evita Hartmane, Heba Ismail and James Tomkins joined me for the first outing of our new public engagement activity: Scientific Scissors. The activity is all about Genome Editing – What is it? How does it work? What can we do with it? What should we do with it? Why is it important? The aim is to start conversations about new technologies and give people the opportunity to ask questions whilst engaging with the ethical issues involved.

Our “ethical washing line” gives visitors the chance to explore various applications and place them on a spectrum from approval to disapproval. This is a dynamic exhibit and visitors are encouraged to move, swap, change and shuffle the cards along the line as they see fit, but also to explain their decisions and confront their own assumptions. 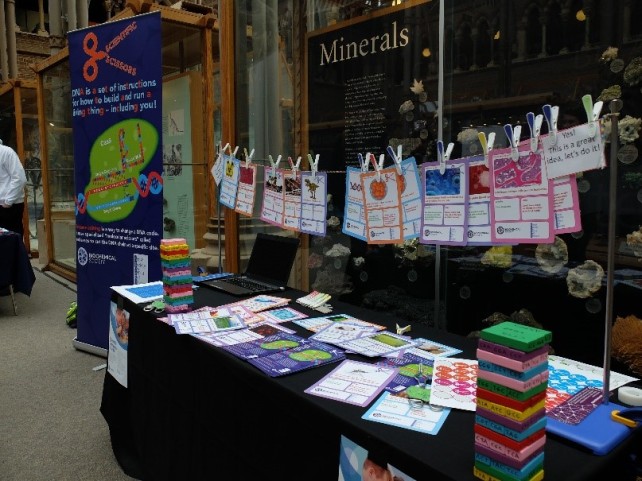 It was fascinating to see the differing opinions – in particular the more positive attitudes to GM food of the younger guests compared to the more mature visitors. People were also able to take part in our online poll (see below).

For those visitors up for a challenge, they were invited to have a go at our “Genome Jenga”, using Cas9 to “Knock-out” a gene. I admit to being surprised at how many genes could be removed before the genome became too unstable! Visitors were asked to consider what some of the potential uses and possible difficulties there could be from the use of this technology.

The aforementioned dinosaurs ensured that there was plenty of discussion about de-extinction, but this acted as a wonderful entry point to conversations that spanned the gamut from GM food, treating inherited genetic diseases, climate change, “golden rice”, and all the way through to genetically enhanced athletes.

Scientific Scissors – coming to an event near you soon.

The event attracted a broad audience; school pupils from years 5-13, undergraduate students, holiday makers, local retirees, even some St Patrick’s Day revellers(!) and they all got the chance to hear some amazing talks, speak to some great researchers, and get hands-on making model viruses, sequence bracelets, and origami DNA. With activities from a range of institutes and societies, visitors had no shortage of things to see and do.

Scientific Scissors will now be touring the UK at a variety of events and festivals.

All the resources for Scientific Scissors can be downloaded for free from our website. Let us know how you get on and feel free to share any pictures of you running the activity.